Habits of a Systems Thinker 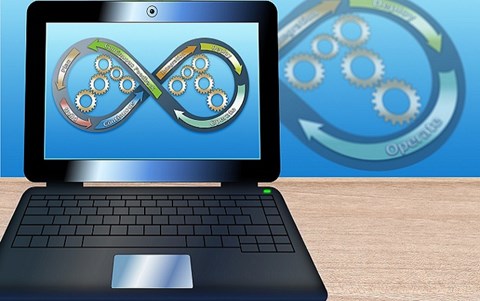 This lesson introduces some of the skills and concepts involved with Systems Thinking. Students are introduced to a number of Habits of a System Thinker, positive and negative feedback loops and the concept of supra- and subsystems.

These items can be used for formative assessment purposes towards the relevant achievement standards below.

Additionally, a self-assessment sheet for reflection is available in PDF or Word format. Skills to be circled on the sheet each relate to activities in this lesson idea.

Watch the short video on Biosphere 2.

Biosphere 2 is an example of a system: a collection of parts that are arranged and connected in a specific way. Interactions between the parts within the system, and between systems, influence the stability of the system as a whole.

It's possible to have a collection of items that don’t form a system, such as appliances in a kitchen. As they are not interdependent, the removal of a toaster will not stop the fridge from working. Similarly, the order in which you place items in a backpack does not affect the usability of each item – they are a collection of items but not a system, because there is no interconnectedness.

As a class, be guided by these questions and activities.

One suggested cause is the adding of rich farming soil to help boost initial food production when the experiment began. The soil consumed or absorbed more oxygen than the rest of the internal ecosystem could balance out, so oxygen had to be pumped in.

This example shows how causes of problems within a system are often not immediately apparent, and may sometimes only be revealed with observation over time. The designers of Biosphere 2 correctly predicted that many of the added plants and animals would not survive the early stages of the experiment, but may not have foreseen this disruptor.

Adapt this learning map to suit your student’s needs. For example for students at Year 6, a learning map might look like:

A systems thinker aims to understand the relationships within a system, and the impacts on other systems. By using a wide perspective and tracing interrelationships, systems thinkers can ‘join the dots’ to draw conclusions or make predictions. This is because they note events and patterns of behaviour and understand how these are caused by system structures such as feedback loops. They view things in circles rather than in straight lines. Systems thinkers use tools to help with their thinking such as causal loop diagrams and models.

Feedback loops are an important element in systems thinking. There are two types of feedback loops that help explain how changes have happened within a system and why. Loops imply that feedback works in circles rather than in straight lines.

When a change is happening in a system, a negative feedback loop tends to dampen or buffer the change, leading to more stability. Despite the name, this is often a ‘good’ thing!

The causal loop diagram at right is showing that A causes B, but B has a balancing or stabilising effect on A. 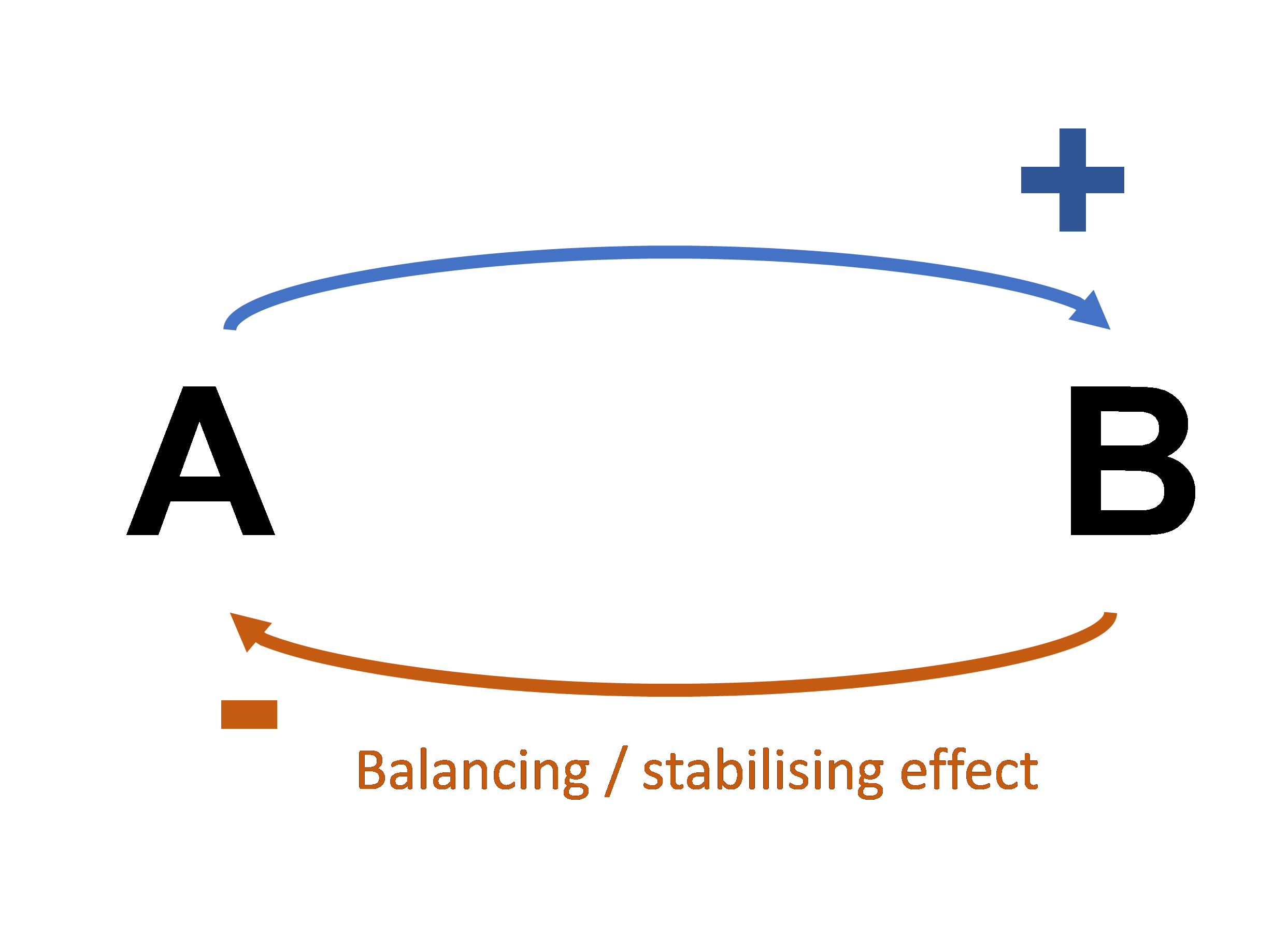 The table below includes three examples of negative feedback loops. As a class, develop some other examples.

When a change is happening in a system, a positive feedback loop amplifies or exacerbates the change. This means that change will continue in the same direction, reinforcing its effect. Despite the name, this is often a ‘bad’ thing, because it has the potential to make the system less stable over time. If positive feedback loops continue, a system may undergo ‘boom and bust’ cycles, unravel to a lower level of complexity, or collapse completely. 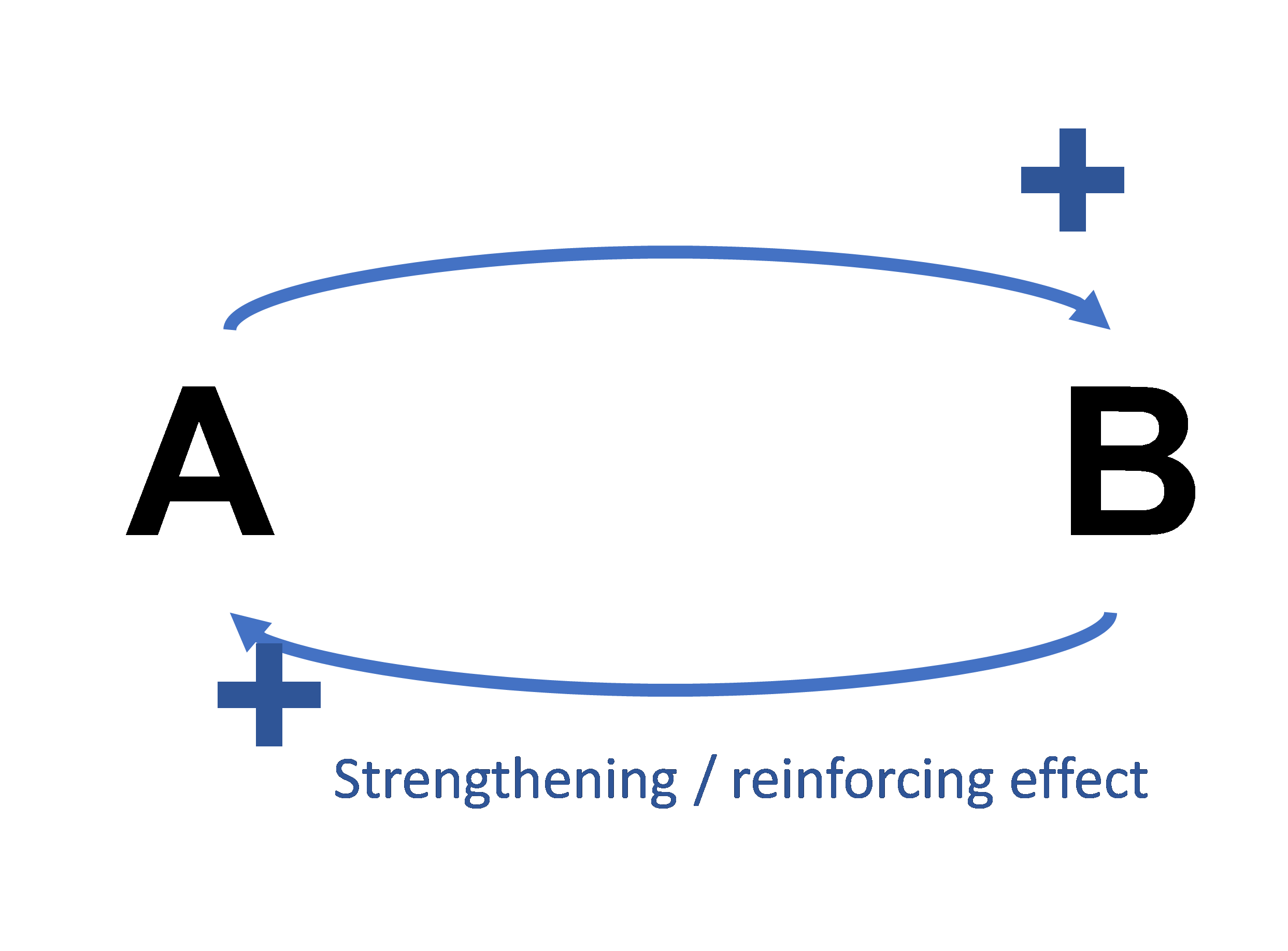 The table below includes two examples. As a class, develop some other examples.

* Teachers may highlight here that many systems like the atmosphere are very complicated and not fully understood. Both positive and negative feedback loops exist in our biosphere, and this is just one feedback loop that has been identified.

It is often possible to identify subsystems, smaller systems operating within a larger one. For example, in the context of a video-sharing social media platform, an individual smartphone can be seen as a system with interconnected functions – taking photos and videos, using the app, playing music. But even the photo and video functionality is itself a subsystem with interdependent hardware (the camera) and software components (apps and image processing algorithms).

The smartphone is also part of a supra system, relying on the internet for many of its functions, interacting with users, commercial entities, developers and more. Consider other systems now – this time systems of the human body. As a class, complete these statements with subsystem or supra system.

Users as part of digital systems

When describing digital systems or information systems, systems thinkers acknowledge that hardware, software and data are not the only components of the system. Users must also interact with parts of a system, usually by following procedures and using interfaces.

Understanding the interactions of a user within a digital system is critical to the development of effective user experience.

As a class, revise the habits of a systems thinker (see the ‘Learning input’ section) by listing them:

Ask students to do the following, using the habits of a systems thinker:

** Teacher should exercise caution and awareness of student sensitivities before presenting this as an option. However, this may be a useful tie-in to health topics.