Light up soft toy with LilyPad

This project will explore two ways of controlling the flow of current to a LED using a button and switch. 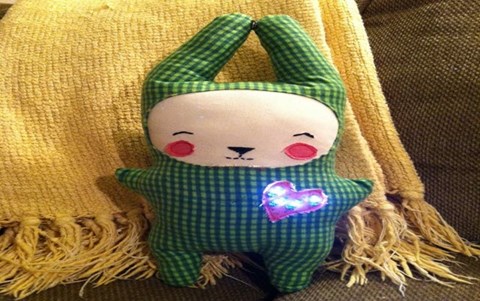 No programming is initially expected in this project, however once students are comfortable with connecting or sewing their circuits and attaching lights, a follow-up project that involves using a pre built Arduino program to light up a series of lights in order would be a useful next step. This lesson idea was created by Peter Lelong.

This project will explore two ways of controlling the flow of current to a LED using a button and switch. No programming is initially expected in this project, however once students are comfortable with connecting or sewing their circuits and attaching lights, a follow­up project that involves using a pre built Arduino program to light up a series of lights in order would be a useful next step.

The LilyPad is an Arduino device designed for e­textile design activities using conductive thread and sewn into fabric.The LilyPad system was designed by Leah Buechley at the University of Colorado Boulder. The commercial version of the kit, which launched in 2007, was collaboratively designed by Leah and SparkFun Electronics. You can learn more about LilyPad at SparkFun.com/LilyPad.

The understanding of simple circuits both serial and parallel is an advantage prior to commencing work with the LilyPads.

Parallel circuit simulation: This resource also addresses Science Understanding in the area of physical science for up to year 9 science students. Students learn some Science Inquiry Skills in the process of the simulation. This resource should be used with other Intel resources on electric circuits for maximum benefit. A resource can be found on the Digital Technologies Hub

The following is an example of a parallel circuit 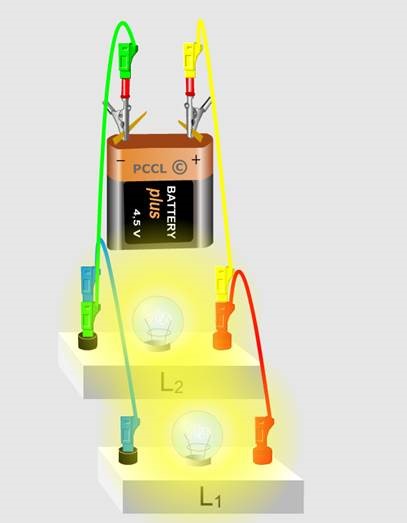 Series circuit simulation: In this simulation students select and move a battery, switch and two light bulbs to positions around a circuit so that the light bulbs are in series with each other. Students receive feedback if their circuit is not a working series circuit. Students drag and drop a battery, switch, and two light bulbs into position on a circuit. Students can compare the brightness of one bulb in a circuit and two bulbs in series in the circuit. A resource can be found on the Digital Technologies Hub

In this exercise no programming is required;

Some practical sewing skills using a needle and thread would be desirable.

Creating a plush toy that lights up is an attractive undertaking, and many girls will relish the opportunity to bring their creativity to the project. The learning hook could be strengthened by adding an authentic social context. Girls engage more deeply with project-based learning that connects to meaningful contexts. For example, students could explore the role of light in sensory toys or sleep aids for children, or for children with hearing or vision impairments, and create a toy that combines multiple sensory experiences (ie light and texture).

Students design and create a plush toy that has various elements connected to a LilyPad with battery and on/off switch.

Allow time for discussion on circuits and the future of clothing that contains some form of circuitry. Look also at smart materials and how they might change the way we dress and think of clothing in the future.

Ask students how smart clothing that monitors an individual’s health might be of value.

Girls engage with collaborative, social learning and respond well to hands-on learning opportunities. Girls may have had less experience with electrical circuits and need more time to explore at their own pace. Before engaging with the simulated circuits, students could work in pairs to explore building actual series and parallel circuits, then use the simulations to further test their hypotheses. Students could test their power source, switch, conductive thread and LEDs to ensure the circuit works.

Teachers should be familiar with circuitry and have some understanding of how to thread and sew with needle and material.

Have students watch the video on sewing conductive thread

Girls often do not see STEM as a creative pursuit. Emphasising the creative process as well as the final construction of the toy enables girls to fully develop and refine their creative ideas. Students could be given the opportunity to sketch their designs, seek feedback from peers, and iterate on their design before creating their toy.

Engaging in context-based, project-based learning requires students to not only design a solution but also to test that solution in context. Girls value context-based learning and projects that ‘make a difference’. Having designed a toy for a specific purpose (eg sensory engagement), students could explain their toy to the class, and include a video of a small child engaging with the toy. They could use the video to justify their assessment of the success of their design.

Girls value creativity and opportunities to problem-solve for the common good. They could reflect on the creative opportunities of e-textiles, the potential market for e-textiles, and how to take ideas to market. In addition to considering fashion opportunities, they could think of other functions of e-textiles and how those might be applied. There is also potential to build on this project and incorporate the Lilypad technology that requires a certain level of programming using the Arduino IDE. Students could explore the possibilities this type of technology might open up for their next creative project.